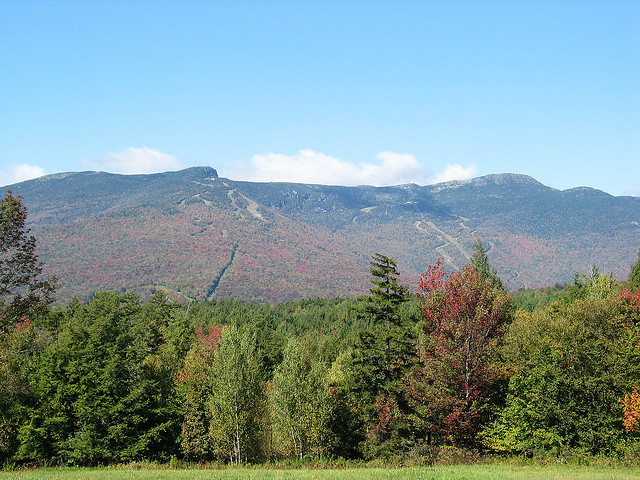 1 Mount Ascutney
Mount Ascutney (3,130 ft) is located in the east of Vermont, near the town of Windsor and close to the New Hampshire border. It is a monadnock, which means that it is a lone-standing mountain. This is always great, as mountains like this tend to offer great views of the surrounding area and this is certainly the case with Mount Ascutney. The Weathersfield Trail runs to the summit past waterfalls and a couple of great lookouts. The summit itself is a bit disappointing, but an observation tower makes up for that.

2 Mount Mansfield
As the highest mountain (4,393 ft) in Vermont, Mount Mansfield offers spectacular views from its summit. On a clear day you can see the entire state, from the Canadian border in the north to the Green Mountains in the south and across Vermont to the east. The summit has an alpine climate and features some rare alpine vegetation and flowers.

3 Camel’s Hump
Although not the highest mountain in the state, Camel’s Hump (4,083 ft) is an icon of Vermont. It’s even on the state’s flag and is a National Natural Landmark. If you have to choose one mountain to climb in Vermont, it should be this one. There are trails leading to the summit from the north, east, south and west and most round trips don’t take longer than a day.

4 Bald Mountain
Bald Mountain (3,315 ft) is located in the middle of the Northeast Kingdom. You can access the summit from three different hiking trails. The view from the fire tower is breathtaking and includes Lake Willoughby and the White Mountains in New Hampshire. The trails to the summit run past clearings in the woods where you have a good chance of spotting moose.

5 Killington Peak
Located in central Vermont, Killington Peak (4,235 ft) is the second-tallest mountain in the state. It falls into the same category as Camel’s Hump and Mount Mansfield, as one of the greatest mountains in Vermont. The vistas include mountain ranges in three states: the Green Mountains, Adirondacks, White Mountains and the Taconic Range.

6 Mount Abraham
Mount Abraham (4,005 ft) is the lowest of Vermont’s 4,000-ft peaks. This mountain is usually combined with nearby Mount Ellen that lies on the same ridge. The views from that ridge and the ‘mini summits’ in between are great. The summit has alpine vegetation and views of three states.

7 Mount Stratton
The day hike up to the summit of Mount Stratton (3,940 ft) is a challenge and it can be difficult to get to the trailhead, but it’s absolutely worth the effort. The views from the fire tower at the top cover the whole of southern Vermont. This is a sacred mountain for hikers, as both the Long Trail and the Appalachian Trail run across the summit.

8 Jay Peak
Actually a ski resort area, Jay Peak (3,862 ft) also makes for a great hiking destination. The mountain is located about five miles from the Canadian border and its summit offers wide views of the mountains and valleys of northern Vermont and Québec.

9 Mount Pisgah
Mount Pisgah (2,752 ft) lies right next to the beautiful Lake Willoughby in northeastern Vermont. It is a popular destination among hikers and (ice) climbers and less crowded than the Green Mountains and New Hampshire’s White Mountains. There are fabulous views from cliff tops and you also have a chance to spot falcons and hawks on the mountainside.

10 Long Trail
The Long Trail is the oldest long-distance trail in the entire United States. It runs from the south of Vermont north to the Canadian border and is 272 miles long. Following the main ridge of the Green Mountains and running across almost all major summits, it offers spectacular views to both sides. The southern part of the Long Trail coincides with the famous Appalachian Trail.