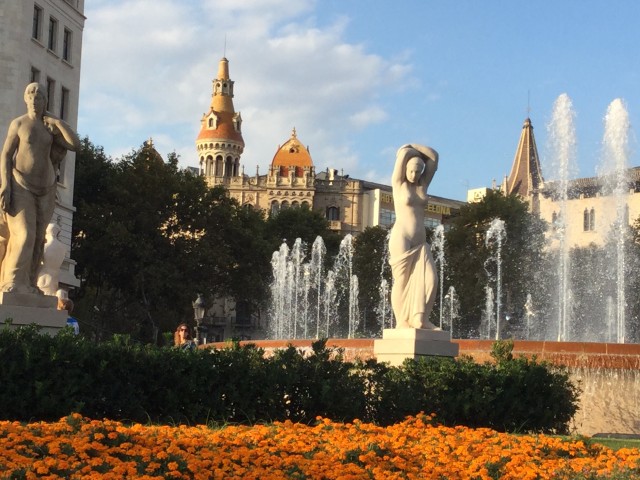 Barcelona is a city of splendour, known for its vibrancy, mix of old and new, and of course, its famous football team. A popular city break destination, Barcelona is also world famous for its architecture, most notably for the work of the eccentric and wonderful Antoni Gaudi.

You will see examples of Gaudi’s work throughout the city, however it’s not only Gaudi who put his mark on this, the Catalonian capital. You will find buildings which span over 2000 years, right back to the Roman era, however there are also examples of gothic influences, art nouveau, and many others. Of course, Gaudi’s work is like no other, unique from everything else, however it’s certainly worth looking beyond one man.

La Sagrada Familia Basilica
This is perhaps Barcelona’s most famous attractions, and it is certainly one which causes queues; if you visit here, and you certainly should, then expect to queue for anything up to two hours. Gaudi’s most famous work is still under construction and although it has courted controversy over the years, it is expected to take a good few years yet before completion. Gothic in style, it has been in construction since 1882, and you can visit a museum inside the building to tell you more.

Basilica de Santa Maria del Mar
Also known as Our Lady of the Sea, this is arguably Barcelona’s most beautiful gothic church, built back in the 14 century, taking only 54 years to complete. Its architecture and design is simple but intricate and effective. It is also said that during construction, workers spent a day per week carrying the stones on their backs, and this is reflected and paid homage to in stone carvings throughout the building.

Torre Agbar
This building shows that architecture doesn’t have to be old to be considered grand. Completed in 2005, it is a cucumber shaped tower, which offers a different take on Barcelona’s skyline. When light hits the building it shimmers in blues and reds, and although Jean Nouvel’s work did cause a few raised eyebrows, it is a very popular addition.

Palau de la Musica Catalana
Built between 1905 and 1908, this beautiful concert hall is still an example of modern architecture, consisting of tile, brick, stone, and stained glass. Now a World Heritage Site, it also includes a sculpture of Wagner’s Valkyries, and the upstairs auditorium is a must see, with a beautiful ceiling of stained glass in gold and blue.

Pavello Mies van der Rohe
This is another modern choice, and a simple one at that. Designed in 1929 by Ludwig Miles van der Rohe, it also houses a statue of Alba by Georg Kolbe. The building was removed and reconstructed in 1980, which gives it a more modern feel, but it’s construction with glass, steel, and marble sits wonderfully in the old and new feel to the city overall.

If you’re visiting Barcelona for shopping, culture, and a general good time, make sure you spare a little of your break to check out some of the wonderful architecture on display – these are just five examples.

Image is of Catalonia Square in Barcelona.