Rome is my favorite European city of those I’ve visited so far. These were my five favorite things to do in Rome when I visited there a few years ago.

Gelato in Rome lives up to the hype. It was hard limiting myself to one a day, especially as we were staying directly across the road from one of Rome’s oldest gelato factories and shops. Luckily for vegetarians many Italians are lactose intolerant, so there are also numerous options for creamy soy gelato.

Gelato in Rome lives up to the hype. Vegans can find soy gelato, because many Italians are lactose intolerant.

My partner and I found the Colosseum a fascinating place to walk around and explore. I am not particularly into history or ruins, but I do find the history of the Roman empire and Roman exploration interesting. 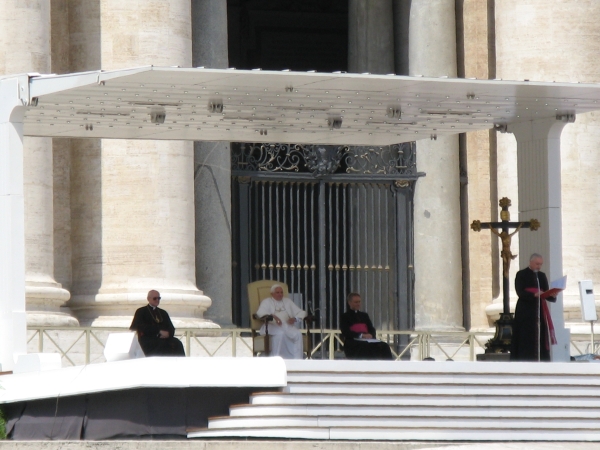 I randomly stumbled on the Pope in St Peter’s Square, Rome.

The Vatican City is not part of Rome or even part of Italy, so if you’re a country collector you get to count a whole new country. We randomly even saw the pope giving an address in St Peters Square. See Michelangelo’s work in the Sistine Chapel in the Vatican Museum.

The Pantheon and Trevi Fountain are only 650m apart so easy to do together. Yes, this area is crawling with tourists but it’s INCREDIBLE how well preserved the Pantheon is when it was built in 126AD!

Strolling and interacting with Italians

Rome is a lovely city of strolling, watching Romans, and trying out your Italian by making small purchases at markets etc. Try buying some local produce at a farmer’s market and making your own pasta and veggies back at your apartment/B&B/hostel. We also enjoyed watching Roman boys playing soccer in the gardens at the Villa Borghese.

Rome’s metro is generally not very useful for getting around the central Rome attractions, so consider the hop on hop off bus if you’re wanting to hit Rome’s top attractions in a short amount of time. In summer the bus keeps running at night. Definitely stay out in the evening when in Rome since the city is at it’s most romantic in the evening.