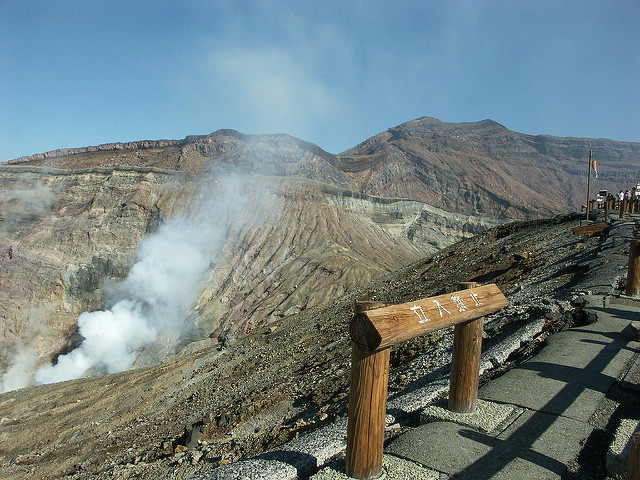 Most of us are drawn to things of great natural beauty, and many of us also have a fascination with things that mystify and terrify us, like sharks and volcanoes. Volcanoes are one of nature’s deadliest and awe-inspiring creations.

Towering high above the skyline, capable of complete and utter destruction, a volcano also has a gentler side, a side which is simply awe-inspiring, with a glow which can light up the night sky – of course, you need to put into perspective that at any time that glow might turn into something a little more sinister.

The good news is that scientists monitor volcanoes constantly, so unless there is an extremely unexpected occurrence, they know when an eruption is likely to happen. The even better news therefore is that you can visit these mights of nature and check them out for yourself.

Mount Aso, Japan
On the island of Kyushu, this is Japan’s most active of all its volcanoes, and there are signs of an eruption in the near future. Despite that risk, there are some amazing views to be seen from visiting this area, and it boasts a huge candera, one of the largest in the world. Easily accessible too, however do check for closures, as it is roped off from time to time.

Mount Etna, Italy
Sicily’s famous volcano is constantly active, so again you do need to check updates if you intend on visiting. You can visit the highest point allowed in the same day, passing by beautiful scenery and signs of previous eruptions. A guided tour is the best way to see all the sights, and to take in the best of the views over Catania.

Mount Vesuvius, Italy
Everyone knows the name of this one, and although it hasn’t erupted in a long while, there are always signs of activity going on beneath the surface. Again, a guided tour is the best way to get the best of the history of this particular beast, and the views over Naples are amazing.

Arenal, Costa Rica
Costa Rica’s famous volcano has its own national park, located a few hours’ away from San Jose, the nation’s capital. Whilst it looks pretty and awe-inspiring at the same time, don’t be fooled into a false sense of security; Arenal destroyed the town of Tabacon in 1968. Again, check out a guided tour which will take you through some fantastic scenery, including rainforests and hot springs.

Kilauea, Hawaii
We know that Hawaii is full of active volcanoes, and this is one of the most active of them all, whilst also being rather touristy at the same time. Whilst it hasn’t erupted in a huge style for a long time, there has been constant activity measured, and around the summit you will see rolling lava fountains. A guided tour is the best way yet again, because it is set in a national park and a little difficult to get to by other means.

Are you feeling inspired to check out one of nature’s deadliest, but most beautiful sights?

Image of Mount Aso by luna76 under Creative Commons license.