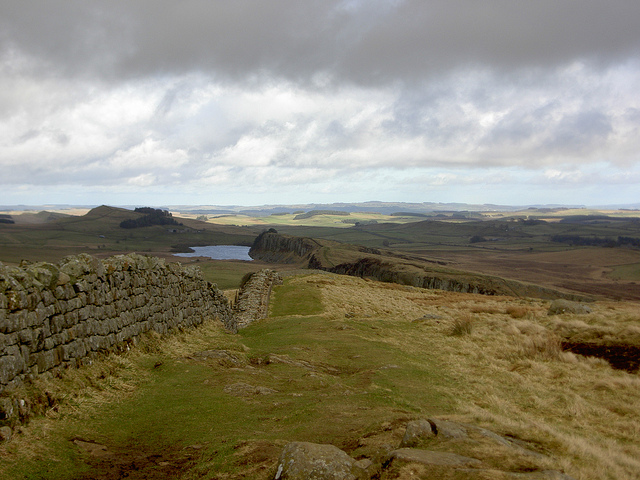 Let’s start off with some background history here. Hadrian’s Wall was built in 122 AD by Roman Emperor – surprise! – Hadrian. It was both the northernmost and most heavily fortified border in the entire Roman Empire. After conquering the south of Britain and after continuous battles with Scottish clans in the north, it was decided to build a wall for protection and control. Hadrian’s Wall ran for 73 miles from Segudunum in the east (Newcastle) to the Solway Firth in the west. The wall was guarded heavily and at every mile the Romans built a milecastle which kept an eye on people and goods moving across the border.

Nowadays large parts of the original wall are gone – the stones were used to build houses, farms or other constructions over the centuries until the remains were protected. Some sections are still buried, however there are several areas where the wall is visible and even touchable.

The Hadrian’s Wall Path runs alongside and sometimes even over this ancient and superb UNESCO World Heritage Site. It starts in Wallsend, a suburb of Newcastle, and ends in Bowness-on-Solway near the Solway Firth. It’s 84 miles long and literally traverses England, from the North Sea to the Irish Sea; it takes six days to complete the hike.

The best time of year to walk the Hadrian’s Wall Path is Summer through early Autumn/Fall. There are several campgrounds, B&Bs, pubs and inns to stay at and quench your thirst along the way – it’s England after all!. Camping is a great deal of fun, but you have remember that this is England and there is always a better than fair chance of rain. Then again, after getting completely soaked, you do appreciate the sunshine and warmth even more! There are no good things without bad things. Staying at inns or pubs is recommended in the fall, when the weather tends to be wetter and chillier. It is absolutely great to arrive at a pub after a long day’s walk, take a shower and sit down for a pub meal and a large pint of local ale. Do keep in mind, though, that it is a popular trail and it is recommended to book ahead.

The first two days of the hike will take you through the suburbs and city center of Newcastle, across fields and through country streets. It’s not until day three that the landscape starts to open up and you really feel like you’re in England. There are rolling hills, bogs, stones, sheep, marshes and meadows. You will get the feeling that you have arrived in the middle of nowhere. That is not the case though. While it may take you a full six days to hike the Hadrian’s Wall Path from start to end, in a car it wouldn’t take more than two hours! The great thing about hiking from place to place is that you get a real feel for a region; you smell the smells of the countryside, hear the sounds of nature, feel the weather…
On day five the landscape starts to get flatter as you approach the Irish Sea. The rivers are wider and flow slowly.
Then you arrive at the endpoint in Bowness-on-Solway and you go for a celebratory pint in the local pub before heading back home.