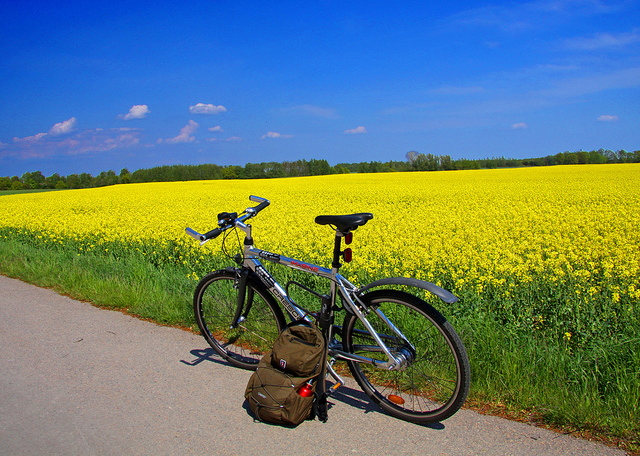 Sweden is one of Europe’s largest countries and one of the least densely populated ones. The vast majority of surface area is covered in woods, lakes and rivers, making it a paradise for outdoor enthusiasts. There is great hiking, fishing, canoeing, kayaking, climbing … -the list goes on and on. Because it is such an underpopulated country and nature is everywhere, it is also a great destination for cyclists. The network of bike paths in and around towns and cities is generally good and there are some excellent long-distance cycle routes as well.

If you want to go and explore a certain area on two wheels, you should head towards a tourist information center. They usually have local maps and more information on where you could go and what you should see. While the urban bike paths are almost always in great condition, the signage occasionally is not, so make sure that you have a proper map. If you are traveling with a family and have kids that are younger than fifteen, make sure they wear a helmet when biking. It’s the law!

Sweden is a paradise for long-distance cyclists. The cycle routes throughout the country are well-marked; signs for local routes are blue, for regional routes look for black signs and national routes are marked in green. Long-distance cycle touring may just be the way to go to explore more of Sweden. The country is dotted with youth hostels, which are generally run by families and are quiet. The hostels in the countryside and wooded areas are especially delightful. Hostels are not only used by foreign travelers, but also by the Swedes themselves. Along the vast coastline you can stay in cottages or cabins and you can find campgrounds throughout the country – there are thousands. If you happen to have an adventurous mind, definitely bring your own tent. The Scandinavian Every Man’s Right or Right of Public Access is fantastic. This essentially allows you to walk, canoe and camp on every piece of public land. The only requirement is that you don’t leave anything behind and don’t take anything with you. It comes down to this: you can pitch your tent pretty much wherever you want. Even on private land, if you ask the owner, you will usually be allowed to camp for a night.

It really doesn’t matter where you go in Sweden. The towns will be picturesque, nature nearby and wildlife abundant. In the south the regions of Småland and Skåne consist of rolling farmland and historic sites. The Swedish coastline is brilliant and has several places where you could take a break from cycling and relax or enjoy some water sports. Further north, you can explore remote Swedish Lapland by bicycle as well – just make sure to go in Summer. Inland, you will find more mountainous and densely forested regions, which by the way are also great for another form of cycling: mountain biking.
Long story short: cycling in Sweden can be done pretty much anywhere. The ideal time of year to do it is from mid-April to mid-October. Keep in mind that in the far north of the country the Summer season is shorter.